As many of you know, I’ve been staying in France or more specifically Aurillac. Though this town is composed of about 30,000 people, there are many decades of history. I’ve been lucky enough to learn and gather as much as possible over my many months here and I’m happy to share it with you guys today.

As I mentioned before I live in Aurillac, a quaint town located in the department of Cantal and region of Auvergne-Rhône-Alps; therefore, I could be considered an Aurillacoises (for a girl) or Aurillacois (for a boy).  If you happen to mention Aurillac in France I can almost guarantee that most people will tell you it’s freezing there. And though this may be somewhat right, the fact is that it’s really only super cold in the mornings. 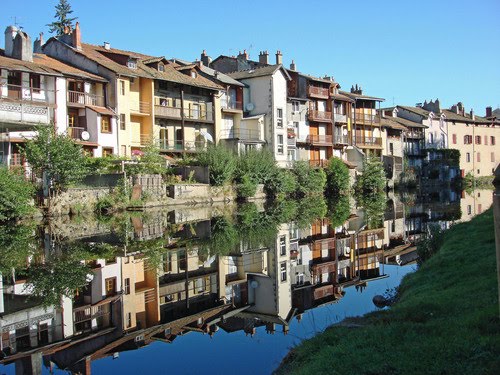 If we head back in time we would have to start from 856, because that is the oldest record people have of the town. In 856, Count Gérald, who would go on to become a famous name throughout the department, was born at the castle where is father was lord. In 855, he founded a Benedictine monastery, which later bore his name. The city of Aurillac was founded in 898 by Gérald shortly after the abbey was created. The first urban area was circular (like most towns during the middle ages)  and built close to the Abbey of Aurillac, or the Saint-Gérald church. Gerald later died around 910 but, his influence left a big impact that over the centuries the name Gérald was always a baptismal name prevalent in the population of Aurillac and the surrounding areas.

The traditional arms of Aurillac shows three silver shells, which were originally on one line because Aurillac was a stage of ‘The Way of St. James’ coming from Clermont-Ferrand, and the three fleurs-de-lis, which indicated a Good Town at a time when Aurillac provided a body of two hundred picked men to King Charles VII to fight the British.

Hopefully this has given you guys a quick glimpse into my town that I’ve been living in for about 9 months now. If you want to check out more I have listed below a PDF of more little fun facts and stories. Feel free to download it and print it out.

2 thoughts on “History of Aurillac”

Looking to save a little extra cash while traveling?   Click the link below to save $40 on your first stay of $75 or more!